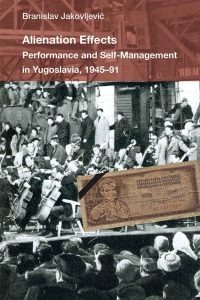 After the formation of Tito’s Yugoslavia following the aftermath of the Second World War, the country followed its own politics of socialism, independent from the USSR and nonaligned, therefore also relatively open to the West.  A specific economic politics of that time was the so-called Self-Management, a form of “social ownership over the means of production and collective decision-making” (p. 289), which can be divided into three specific political phases. The individual worker’s direct involvement in economic processes was a crucial aspect within the pan-Yugoslav identity.

Branislav Jakovljević’ book Alienation Effects connects the concept of self-management to various historic phases of Yugoslavian art and performance. It also analyzes Yugoslavia as a ‘performance state’, showing that the country’s identity was formed, debated and subversively negated in its public spectacles.

Branislav Jakovljević is department chair and associate professor of theatre and performance studies at the Stanford University.